First set:
We kept our serves until 6-6. I kept many first serves in, and attacked his backhand. I missed a lot of returns, which is the reason why I couldn’t break him. In the tiebreak, I hit good serves and first strike shots. I also got more returns in play, and I ended up getting two mini-breaks and won the set.

Second set:
We were even, but he got a break, because of a sloppy game from me. I had two break balls at 15-40, 4-3 to him. Then he hit 4 service winners. There was nothing I could do. I won my serve. Then he hit 5 good first serves in the next game. I was only able to get one point out of those 5.

Third set:
We started with holding serves again, and then I got broken because I hit 3 junior mistakes. He held his serve, and was leading 0-40 in my serve. Then I thought, “fuck it. I have got to play with first strike again. I have become too passive”. I got back and won the game. Then I broke him and held my serve. He won his serve as well after that, but he was struggling. I had taken a step towards the middle on the returns in the deuce side, to cover his flat serve in the T. I kept my serve as well. It was an easier game. I forced him to miss twice, and he made two unforced errors. Now, I was leading 5-4.

I got a 15-30 lead in his serve, and felt like I wanted to really hit the ball if I got the chance. He missed the first serve, and kicked the second serve to my backhand. I ran around it, and chose to for a winner up-the-line. I missed it wide. I should have hit cross to his backhand. It is a safer shot, it would be to his weakness, and I should always hit cross or middle when I want to hit as hard as I can! I could have had match point if I played correctly, but instead I let him get back, and I lost the game.

I lost the first three points on my serve with at least 2 unforced errors. I won the next two points. On the third point, we played a long rally. I made him run to his forehand and approached the net. I was too slow and didn’t get to 135. I missed the volley in the net.

On the last game, I won the first point. On the second, he hit a good serve and a winner on the second shot. I think I missed the third one. He hit an incredible drop shot on the forth, and a serve winner on the fifth. 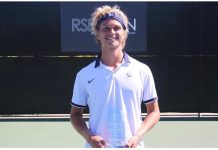 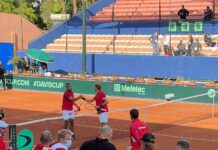 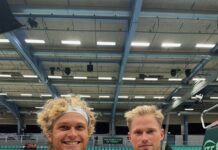 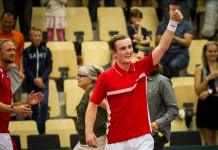 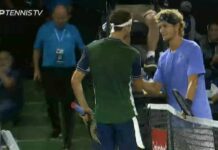 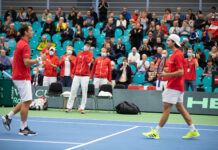